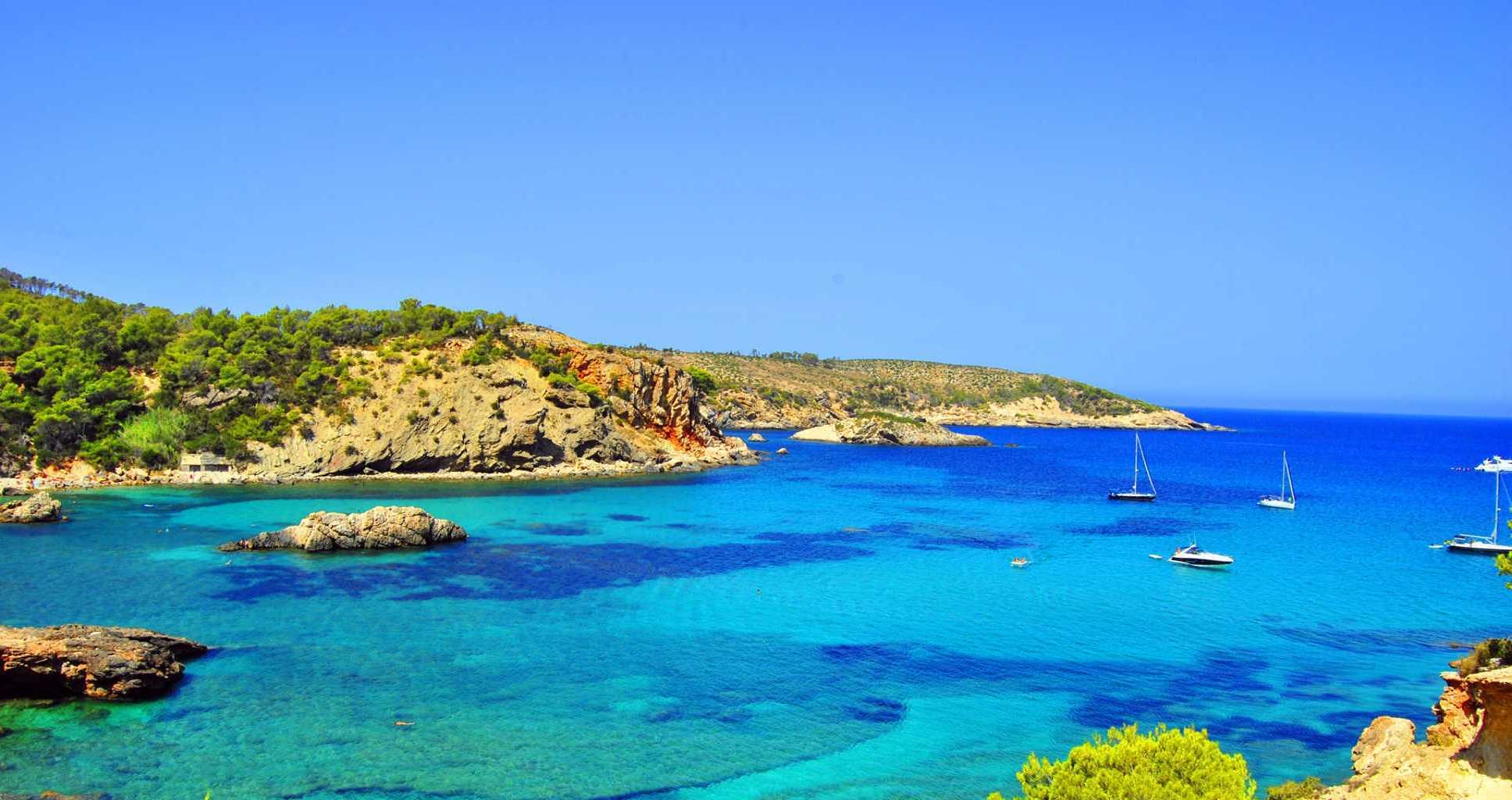 THE BEACHES OF IBIZA

Ibiza beaches are typical urban beaches with all the amenities expected by the tourists. Talamanca beach in Ibiza is a large bay protected from the winds, it have all the desired facilities especially restaurants and bars. Can be reached from Santa Eularia – Ocho de Agosto Street or by boat from Ibiza port.

It is the ideal place to sunbathe and enter the water, you can practice sports like sailing or you can do wonderful walks along the wooden path that runs along the coastline, both in summer and winter.

Ses Figueretas beach is on the other side of the city regarding Talamanca, it is at the end of the road to Espanya in a very urbanized zone and very close to the city center. It has a modern avenue with gardens and trees.

In addition, you can find all necessary tourist services. In front of Ses Figueral beach, Ses Rates and Es Daus islets are located.
Playa En Bossa beach is located next to Ses Figueretas beach in Ses Salines direction, it is a beach of fine sand and crystalline waters; It is ideal for sports such as windsurfing or sailing.

In front of the beach, we find Esponja and Es Malvins islets. This area of the island has become the largest tourist center of the city with several hotels, residences and some of the most famous nightclubs. The beach has all possible and imaginable services.

THE BEACHES OF SANT JOSEP

Des Cavallet beach, without any construction, combines dunes and vegetation into the beach full of rocks. Here you can practice nudism, water sports and there is also a restaurant service.

Ses Salinas beach is a non-urbanized beach, is located 8 km from Ibiza town and is one of the busiest and popular beaches due to its dunes full of vegetation and its fine sand; It is perfect for sports like sailing. It connects to the city by a bus service and has all the amenities such as beach chairs rents, restaurants, shops and sports equipment.

Es Codolar beach has very few visitors, it has a bay without sand and is characterized by the pebbles. From here, you can admire the migratory birds and the planes flying at low altitude due to its proximity to the airport. It has bus and restaurant service.

Cala Jondal beach is a beach without urbanization, its wide bay is characterized by the sand and the flattened pebbles. It has restaurant service and rental of sports equipment.

Es Cubel beach, although has very few visitors, has a regular bus service, restaurant and is characterized by steep ramps in the last section of the road.
Cala de Hort beach is an unpopulated sand bay, is located 10 km from Sant Josep and is one of the most beautiful beaches of the island thanks to the landscapes that offer Es Vedrà and Es Vedranell islets which are facing the bay.

On this beach you can admire the typical fishermen houses and also offers a good restaurant service. Cala Tarida beach is quite urbanized, offers a beautiful view of the islands and is formed by white sand and crystal clear water. It is possible to do sports, rent chairs, there is a dive center and it has good restaurants.

Cala Comte beach consists of two beaches without any construction, is known for the absolute transparency of the water and the deep blue. It is located 13 km from Sant Josep and offers beautiful sunsets and a overlooking to the many small islands. It has numerous restaurants, chair rentals and sporting goods.

THE BEACHES OF SAN ANTONIO

Cala Salada beach is a beach of sand and rocks, is located on the road leading to Santa Agnes and has good tourist services.
Punta Sa Galera beach is on the way to Santa Agnes, it has a very difficult access; It is a very quiet bay, formed by rocks, with an impressive view and is a nudist beach.

THE BEACHES OF SANTA EULARIA

Santa Eularia Beach delimits the city center to the south and is a protected from the wind. At the end of the beach there is a sports port, the area has many shops, restaurants and all kinds of services.
Cala Llonga Beach is located in the center of a large urbanization and has good services on the beach, has the characteristic that the forest reaches the beach.
Des Canar Beach is a very particular beach, it is also in the urban center and has a small fishing port; It is located in front of des Canar and Sa Galera islets.
Cala Nova Beach is a beach of great beauty, it is protected by two rocky outcrops and has a vegetation that grows on the seashore.
Cala Mastella Beach is a beach without urbanization and with very little sand, there is a small fishing port and has a small restaurant by the sea that serves fresh fish only.
Aigues Blanques Beach is one of the most attractive beaches of the island, with fine sand and crystalline waters; it has rocks of strange forms with an ingrained vegetation in the cliffs. It is one of the few beaches on Ibiza Island where nudism is still practiced.
Figueral Beach is one of the most beautiful beaches in Ibiza, has crystal clear waters and fine sand, the area is urbanized and has a couple of restaurants in the sand; It is said that on hot summer days, it is one of the coolest places on the island.

THE BEACHES OF SANT JOAN

Cala Sant Vicent Beach is a beautiful place, with white sand and crystal clear waters, surrounded by mountains. It has a modern promenade and offers an excellent view of the island north coast and Tagomago Islet; it has all tourist services: hotels, residences, markets and bar.Ibiza Island is quite small, 41 km long and 20 km wide, it is rich in history.

The first written notice is known from a Greek historian of the 3rd century BC, the area was inhabited over the centuries by Greeks, Phoenicians, Carthaginians and Romans who provided customs, religion and the local currency.
Together with Formentera and other islands, they are known as the Pitiüses islands because the pine trees abundance.

Ibiza, also known as White Island since Santiago Rusiñol named it like that, is a land open to the sea in all directions. It is the closest Balearic Island to the peninsula as it is only 50 miles from Denia, thanks to the presence of protective hills, it is less vulnerable to the wind differentiating it from other islands. The small size, 41 km long and 20 wide, makes it an easy place to travel, but not to be deciphered.

Decipher Ibiza means to want to know it, deepen in its history of thousands of years, to observe the evolution of its people. Ibiza Island is a paradise of crystalline waters and coves of various sands that have lived on the sea and the land upon to this day.

The docks that still are in some coves of the island, such as Es Pou des Lleó, Cala de Sant Vicent, Cala Comte, Port of Sant Miquel and Cala Mastella, demonstrate the maritime character of its people.

Numerous almonds, carob and olive trees, among fruit trees and various crops scattered throughout the rural area of the island, reveal the millenary agricultural tradition of Ibiza population, which until recently, was dependent on agriculture.

In a distant past, Ibiza exported almonds, figs, charcoal and potatoes to the peninsula and to European countries. In spite of this, in the past there was a fundamental product, salt.

For this reason it was called the salt island, since it was one of the most important saline centers of the Mediterranean. The economy of Ibiza in the XXI century is oriented mainly towards the development of tourism sector, industry that began in the early thirties when the first hotel was built on the island.

The Spanish Civil War years interrupted this process and it was not until the end of the decade of the Fifties that the tourist economy of the island began to grow again until becoming, directly or indirectly, in the modus vivendi of the island.

Currently, the island has a population of 100,000 inhabitants and receives each year the visit of more than three million tourists from all over the world. After the Catalan conquest in 1235, the island was divided into five sectors and was in 1833 when happened the creation of the different municipalities:

Ibiza, Sant Antoni de Portmany, Santa Eularia des Riu, Sant Josep de sa Talaja and Sant Joan de Labritja. Of these five municipalities, Ibiza, San Antonio and Santa Eulalia are the only ones that have settlements with the category of small town.